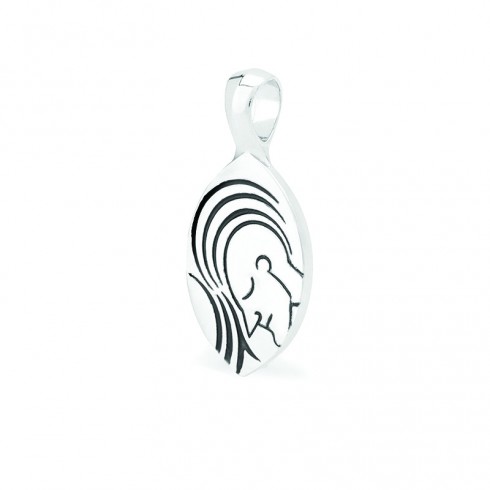 A person who lives in or escapes to a world of fantasy or illusion. Daydreamer, escapist, fantasiser, idealist, romantic, star-gazer, theorizer, mystic.

Express your innersole with the solid face of the Dreamer pendant. 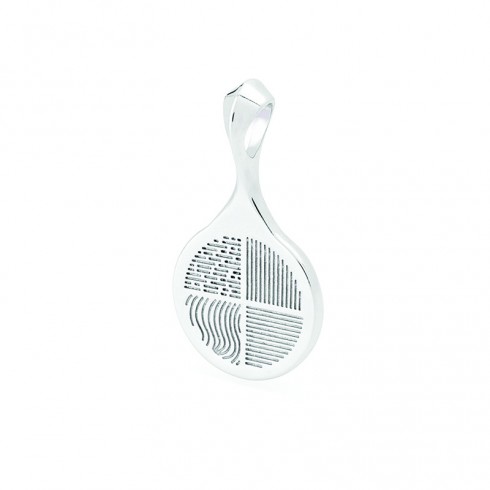 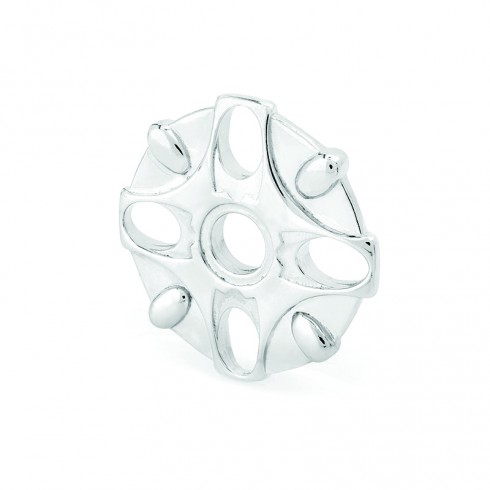 Family, from the Latin: familia, is a group of people affiliated by consanguinity, affinity, or co-residence. In most societies it is the principal institution for the socialisation of children. This is a man's pendant, 21 grams of solid, chunky and strong bronze. It's the strength that holds the hands of the four family members together in our Family pendant. A true piece of jewellery with meaning. 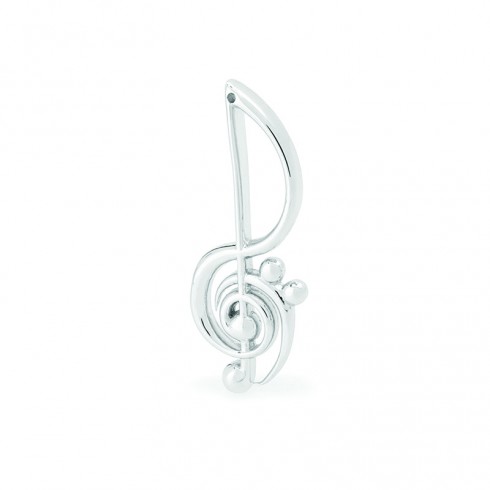 Music is the art form whose medium is sound and silence. The treble clef is a musical symbol used to indicate the pitch of written notes.

This is the most common clef used today and we have captured it in style with solid white phosphorous bronze and glimmering rhodium plating. 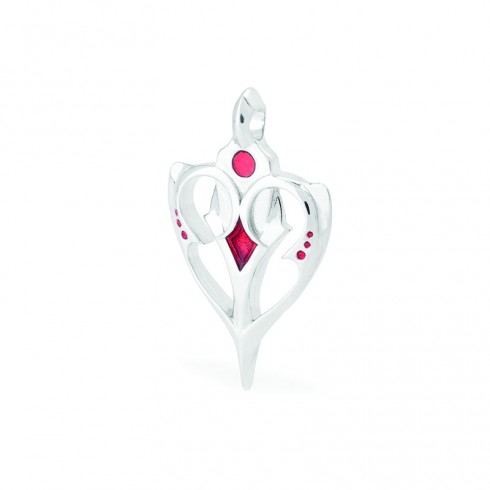 I give to you my everything
You’ve given me these loving wings
And angels have all gathered round
to hear me sing my love out loud. 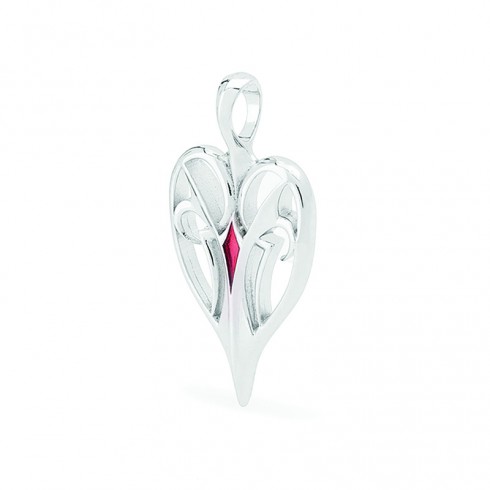 The love of kinship or familiarity, the love of friendship, the love of sexual and/or romantic desire, and self-emptying or divine love. Love heart - used to express the idea of the "heart" as the centre of emotion, including love, especially romantic love. Our modern tattoo style love pendant stylishly encompasses both the heart and love in shimmering rhodium plated bronze with a subtle, red enamel inlay. 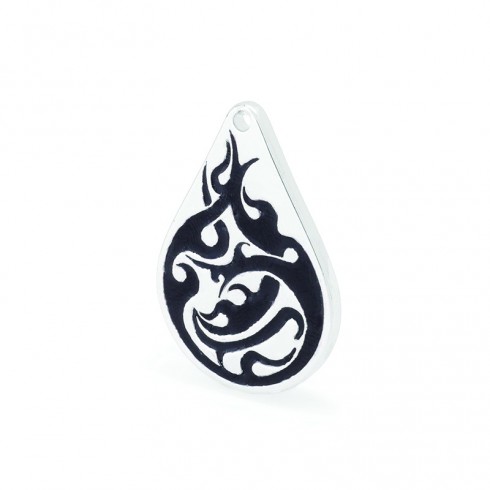 Fire and flame is an important process that affects ecological systems across the globe. The positive effects of fire include stimulating growth and maintaining various ecological systems. Fire is used by humans for cooking, generating heat, signaling, and propulsion purposes. We know people will find their own meaning for this piece of jewellery like the fire fighter who loved the symbolism of the pendant. The intricate black enamel inlay is now more greatly hardened to resist wear. 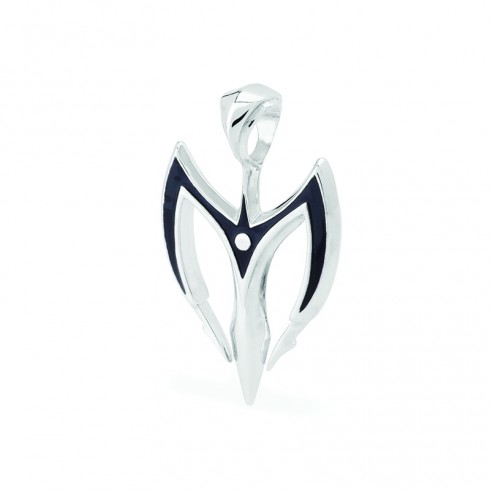 The Tongan word for Sword - Heleta. The sword is said to be the emblem of military honour and should incite the bearer to a just and generous pursuit of honour and virtue.

It is symbolic of liberty and strength. In the Middle Ages, the sword was often used as a symbol of the word of God.

In Oceania, it is a symbol of strength and this pendant embodies that Tongan quality. 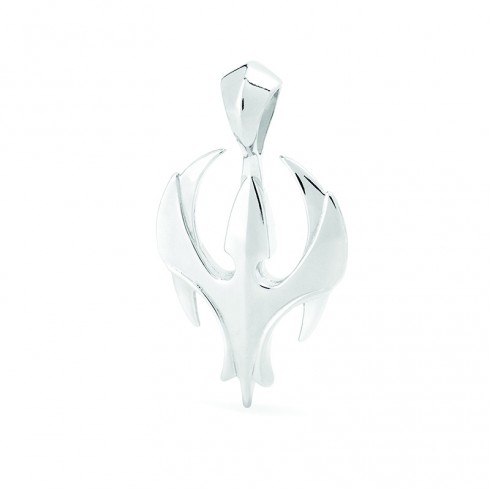 Maori word for "hawk", also known as Haast's Eagle, it is believed that these birds are described in many legends of the Maori, under the names Pouakai, Hokioi, or Hakawai.

In some Maori legends, Pouakai kill humans, which scientists believe could have been possible if the name relates to the eagle, given the massive size and strength of the bird.

Strength is emphasised in our Hokioi pendant and is an awesome piece of tribal jewellery to wear. 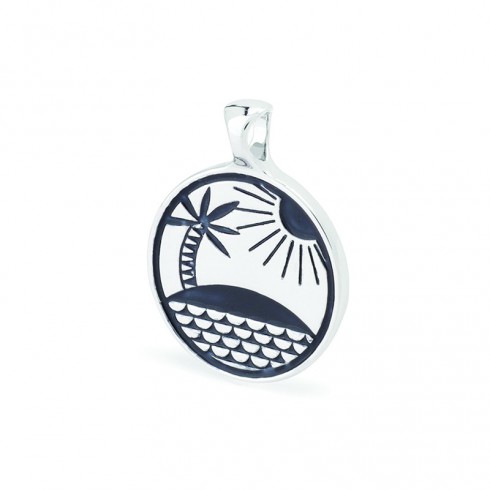 Land that is surrounded by water. Tropical islands offer some of the best beaches and places to relax in the world making them far more than just "land surrounded by water". Escape the ordinary world and travel to a tropical island every day with our symbol of paradise. Keep the memory of a life changing voyage close to your heart when wearing the Island pendant. 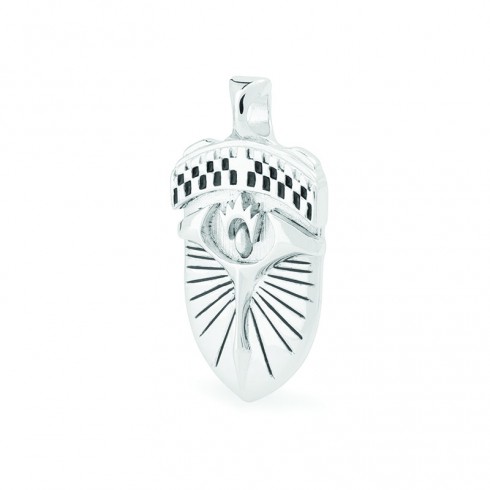 Monarch - Ruled or controlled by an individual. Tonga is the only remaining sovereign kingdom in Oceania. King of the family, king of your world in the least. We have created this pendant with meaning as it depicts a crowned prince or God even. The solid pendant is a shield shape design made from our tough bronze and intricately detailed with toughened black enamel. 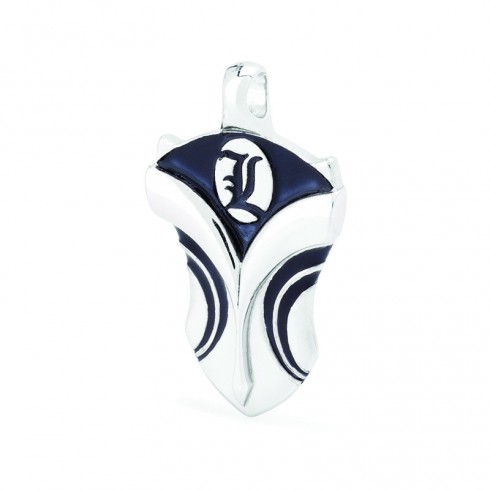 Faithfulness or a devotion to a person, country, group, or cause. The notion of loyalty is "an essential ingredient in any civilised and humane system of morals" John Ladd, professor of Philosophy at Brown University. A belief our company shares and a symbol we have proudly created for you to wear. This solid loyalty pendant embodies strength and resilience, two traits we feel build to loyalty. Made from a strong 20 grams of solid alloy you can wear it with pride. 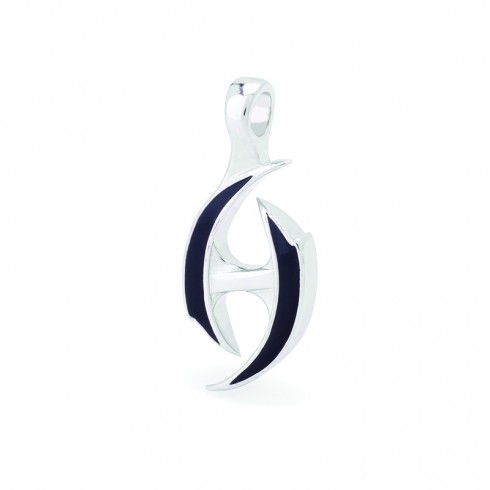 An uninhabited atoll in the southern group of the Cook Islands, Manuae comprises two horseshoe-shaped islets.

Stunning islands of solitude provide the meaning behind this piece. Raw nature with a tribal history. 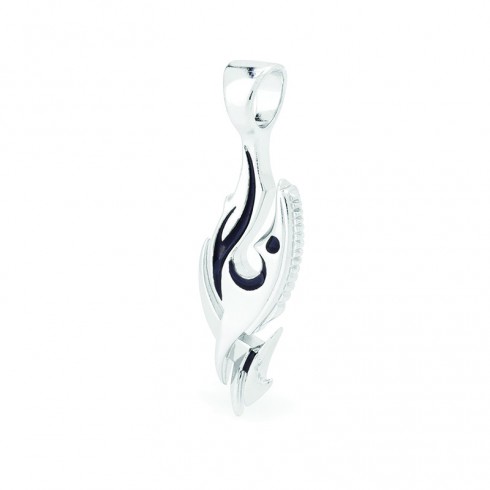 Moto is the Fijian word for "spear". The spear is a pole weapon consisting of a shaft, usually of wood, with a solid, sharp pointed head.

Our Fijian inspired Spear pendant is one of the most detailed and truly tribal jewellery. Designed like a tattoo you will wear this like one and it will last the time. 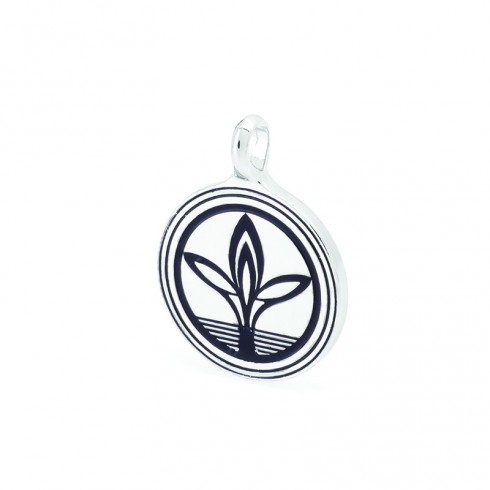 The word nature is derived from the Latin word natura, or "essential qualities, innate disposition", and in ancient times, literally meant "birth". Well we have captured the birth of a plant springing from the soil. Some may say a marijuana plant pendant and if that is what you see who are we to argue. The nature pendant just highlights the beauty of mother nature using rhodium plated alloy from the soil and black enamel inlay from our artisans. 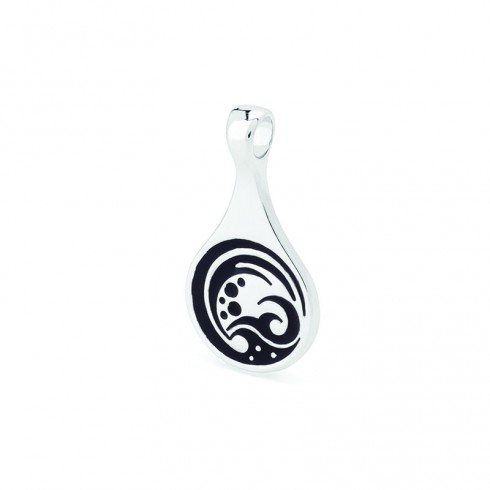 A weak solution of almost everything - what a great description of ocean water. The ocean is indeed a complex solution of mineral salts and of decayed biologic matter that results from the teeming life in the seas.

We have captured the oceans movement with subtle hints of it's complexity speckled among the waves. Masterfully finished in rhodium and detailed with black enamel inlay, this is a wonderfully meaningful pendant for your collection. 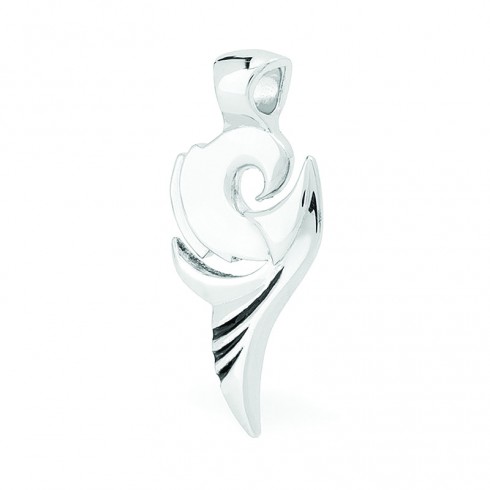 The Orca belongs to the oceanic dolphin family and it is regarded as an apex predator, lacking natural predators. The Orca can be found in all oceans world wide.

Our Orca pendant is an awesome tribal style design made from solid metal and detailed with morphing curves like a tattoo. You will love wearing this symbol and hopefully give you an opportunity to remind people to protest against Japan's "research" whaling program..seriously Japan, if your scientists haven't figured these beautiful creatures out by now then they are idiots and killing more whales wont help. 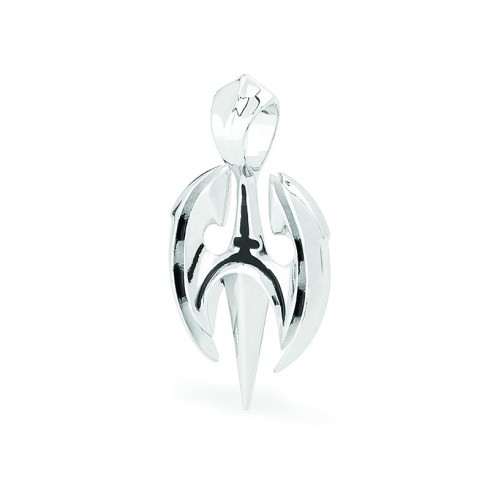 Papua occupies the eastern half of the island of New Guinea. Little was known in Europe about the island until the 19th century.

Still tribal to this day, the tribal spirit of the Papua people is captured in this pendant with a shield shape encompassing a dagger. 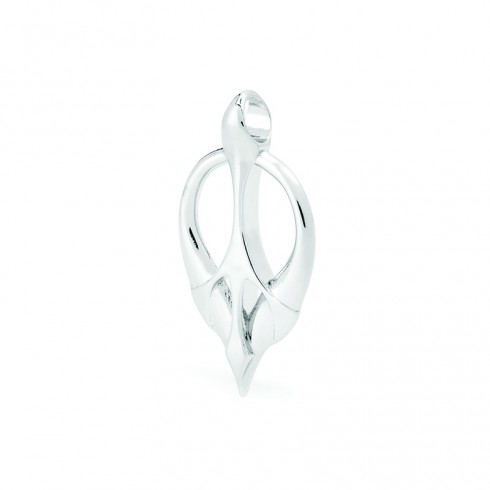 Peace is a state of harmony characterized by the lack of violence, conflict behaviours and the freedom from fear of violence.

The Peace Symbol is the modern olive branch and was originally designed for the British nuclear disarmament movement. More recognisable in anti-Vietnam protests, the Peace pendant features this symbol in a modern and almost tattoo form. In solid white phosphorous bronze and rhodium plated, our peace symbol is a beacon. 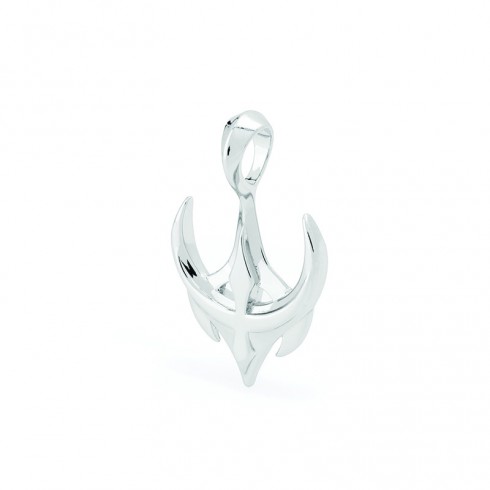 A bird of prey, the falcon can be found nearly everywhere on earth. The highest measured speed of a Peregrine Falcon is 389 km/h.

Falcons, the ultimate symbol. In solid metal our Falcon pendant is strong and the streamlined design is like the precision of a diving falcon. 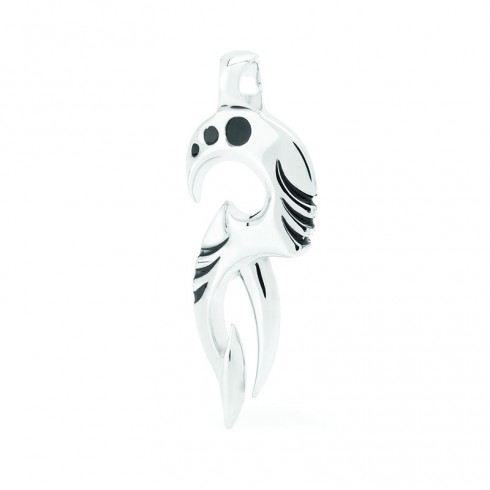 Petrel are seabirds, returning to land only to breed. The word "petrel" comes from the Latin name for the Christian Saint Peter, and refers to the habits of certain species to hover just above the ocean waves, with their feet barely touching the water, thus giving an appearance of walking on water as St. Peter is said to have done.

Our solid metal Petrel pendant is a beautiful design and a favorite among travellers, surfers and free spirits. 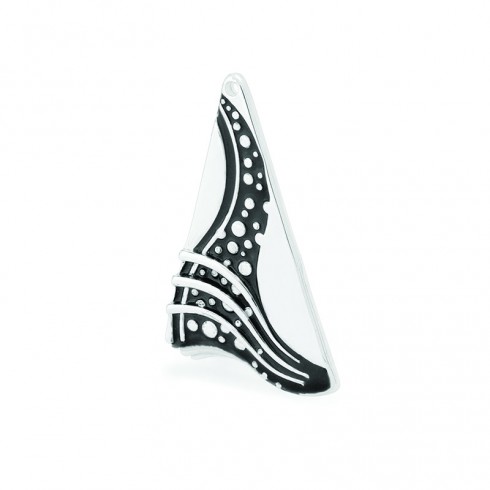 The reef is a feature lying beneath the surface of the water. Coral reefs are underwater structures made from calcium carbonate secreted by corals. 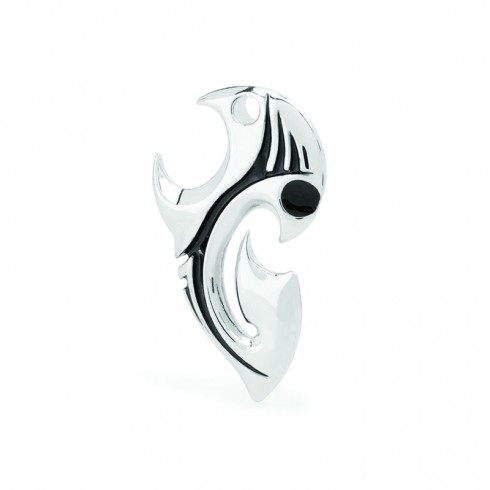 Samoa is a country encompassing the western part of the Samoan Islands in the South Pacific Ocean. The fa'a Samoa, or traditional Samoan way, remains a strong force in Samoan life and politics.

Like this pendant, Samoans are tough, tribal people with a strong relationship with nature. 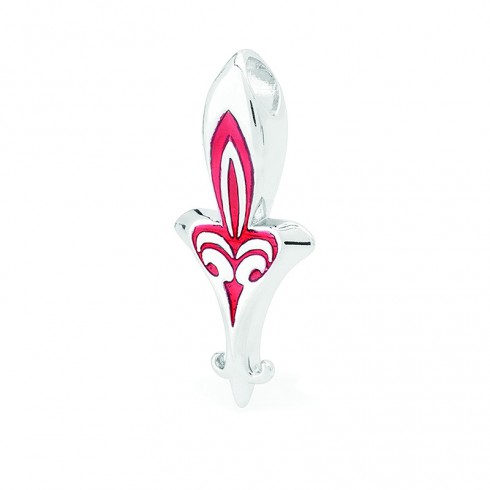 The state or quality of being serene, tranquillity.

Beautiful, solid, rhodium plated bronze with red enamel inlay emphasises how this pendant was designed with meaning. It is a serene combination you will love wearing. 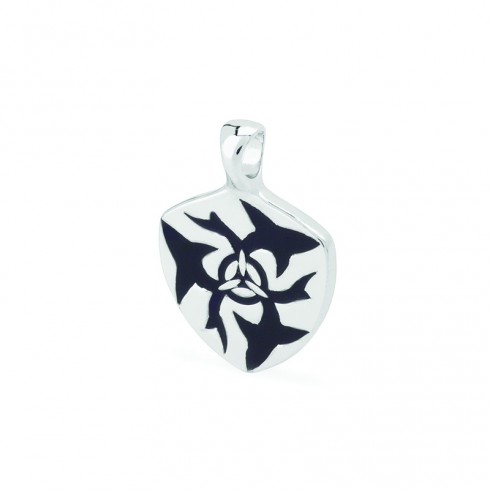 Sharks are found in all seas and are common down to depths of 2,000 metres. They cover thousands of miles in a year and exhibit apparent curiosity and behaviour resembling play in the wild. 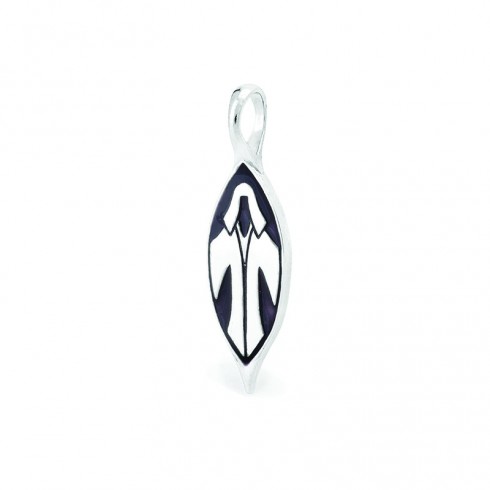 The word spirit is often used metaphysically to refer to the consciousness or personality. The belief in manifestations of the spirits of the dead is widespread, a ghost is sometimes known as a spectre. 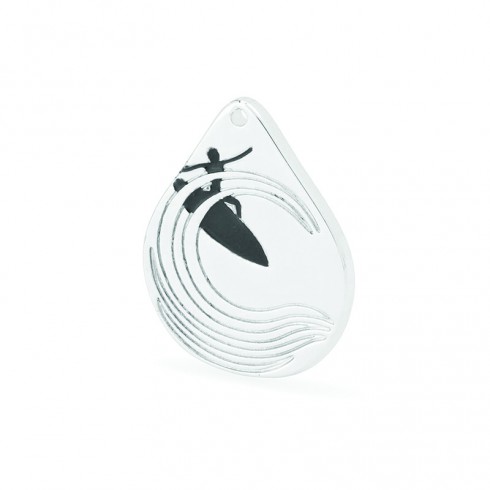 The oceanic condition sought after by men and women alike for the art of surfing. Surfing is a surface water sport in which the wave rider, referred to as a "surfer", rides on the forward face of a wave, which carries the surfer.

Let our symbolic pendant carry your attachment to the waves and wear your passion always. 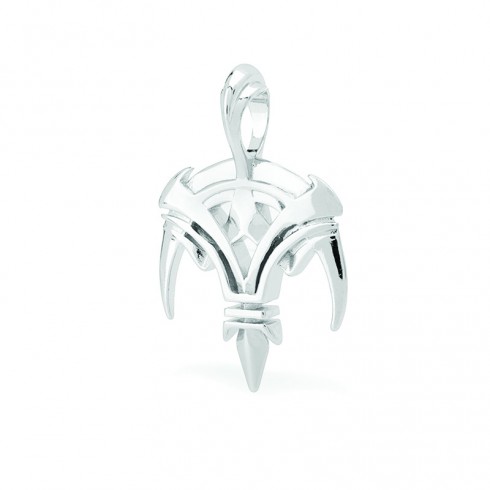 Formerly known as the Ellice Islands, Tuvalu is a Polynesian island nation located in the Pacific Ocean, midway between Hawaii and Australia.

It comprises three reef islands and six true atolls. The Tuvalu pendant is immensely tribal. Just like a tattoo only in magnificent three dimensions.

A great symbol of strength and passion. 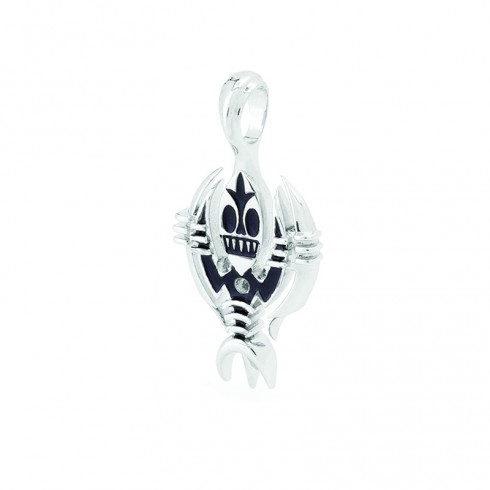 This is an amazing hand crafted piece of jewellery with solid, black enamel inlay. 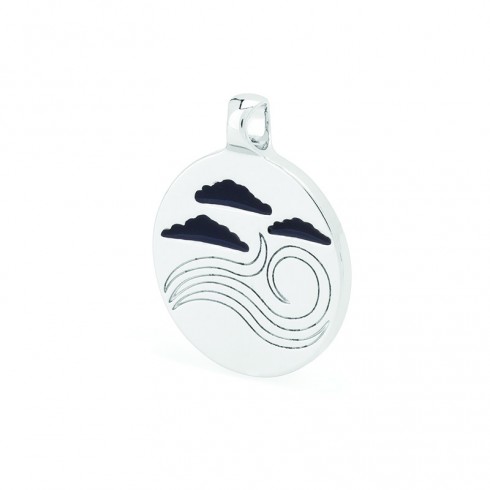 Wind consists of the bulk movement of air, wind powers the voyages of sailing ships across Earth's oceans.

Sailors, wind surfers, lovers of the ocean and nature, this is a piece of jewellery for you. Solid and weather proof.

Looking to be a Pendants stockist?

Please email enquiries@pendantsaustralia.com.au for further information or contact Duncan on +61.2.9698 4024
Get in touch

Pendants Australia is a lifestyle jewellery brand designing and creating jewellery with meaning.

We fan the flame of peoples passions in life, putting fuel on the fire of the things an individual keeps closest to their heart.Through unique jewellery designs we aim to bring meaning to each piece of jewellery we create. For example our surf jewellery lets surfers wear a wave, be reminded of their favourite break or even carry the four elements wherever they go. Wear a symbol of your passion has never been more stylish.

We do understand though that some passions are not always forever and people move on in life. As your passions change, so to can your symbols. Unlike a tattoo, our symbolic jewellery can change and journey with you on the evolution we call life. Pendants Australia, Jewellery for Life.

Please don’t hesitate to get in touch. Call or email us with any questions relating to our jewellery online and even industry questions, we are always happy to share our tips and tricks on making fine jewellery.

We’d love to hear from you. Google+